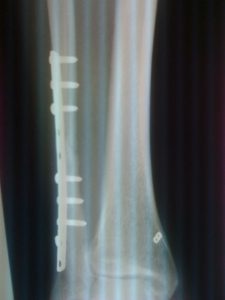 Considering some of the insane things I did as a kid, it’s a miracle I had never broken a bone before that icy night in February.  At what would have been the last point in the game at the end of Jodi’s tennis drill, I jumped for a lob at the net, and I landed on two tennis balls.  With the help of those two tennis balls, my right foot relocated itself 90 degrees to the right.  In medical terms, I had a dislocated foot with a bi-malleolar fracture, spiral fibula fracture with a butterfly fragment, and severe ligament damage including a complete tear of the syndesmotic ligament.  In laymen’s terms, skin and my achilles were the only things holding my foot on my leg.

It was 5 hours before my foot was put back in place. It was 1 week before the ankle was surgically repaired with a permanent tib-fib anchor and 5″ titanium plate. It was 20 weeks before I was finally out of casts, ortho boots, and physical therapy. It was 2 years before I felt anywhere close to recovered.

My right ankle will never be right. If I rotate my foot through its entire (limited) range of motion, it grinds like the gears shifting on my grandfather’s old ’47 Dodge truck, if only I could double-clutch my ankle and shift gears like that old Dodge. The physical therapists told me I’m a couple of degrees shy of the range of motion necessary to run. Candidly, there were times it seemed like cutting the foot off just above the ankle would have been the best solution.

I was a very physical, hack tennis player. My first serve, the biggest weapon in my game, required jumping to generate the power. I relied on foot speed and hitting power to balance my extreme inconsistency. My ankle changed all of that.  I couldn’t move to the right for forehands, struggled to get enough lift to serve properly, and didn’t have the speed to close on short balls. These aren’t the only reasons I stopped playing tennis, but they certainly contributed to my waning interest in the sport.

Right around the 2 year mark, my friend Kevin sent an open invitation on Facebook to any friends who wanted to run the 2011 Oklahoma City Memorial Marathon with him and his wife. Elementary School PE was the last time I had ever run outside other sports like basketball and tennis. I’m still not sure why, but I did a couple of test runs and told him I was game.

During my training, I discovered that even though my right ankle doesn’t do so good with cutting or jumping, it’s pretty effective at running straight ahead. I completed the marathon in horrible conditions with an abysmal time, but I completed it nonetheless and discovered a love for running somewhere along the way.

Why do I run? I run because somewhere between 5k and 10k, I completely forget about my injury. I run because one day I will play tennis again, and I want my speed back. I run because those two tennis balls have taken as much from me as they’re going to take.

On Sunday, I will attempt to run the Route 66 Marathon. I started my training late and have missed or shortened several runs due to injury. Nevertheless, I’ll lace my shoes up and hit the pavement with everyone else and see what happens. Maybe I’ll have one of those magical days where everything feels good, and I have to fight to keep my pace where it needs to be for the distance. Or, maybe I’ll have one of those miserable days where my IT band flares or my muscles seize up and refuse to continue. No matter what happens, I win because I can still run.