As part of my training for the Route 66 Marathon, I planned to run more races to help practice race-day preparation and expose any problems with my nutrition plan.  By the dearth of posts to this blog, you already know well how massively I failed at that task. Fortunately, I did manage to get out to the Jenks Half Marathon as part of what was supposed to be my final long run before Route 66.

The Jenks Half Marathon is a small but long-running Half Marathon operated by Tulsa Runner, the running store right next to the trails I use for most of my training.  It begins near the Jenks High School track and winds around an area North and West of Jenks High School including the R.L. Jones, Jr. Airport.  Being a smaller event, the streets remain open with a small contingent of Tulsa Police helping direct traffic and runners at major intersections. 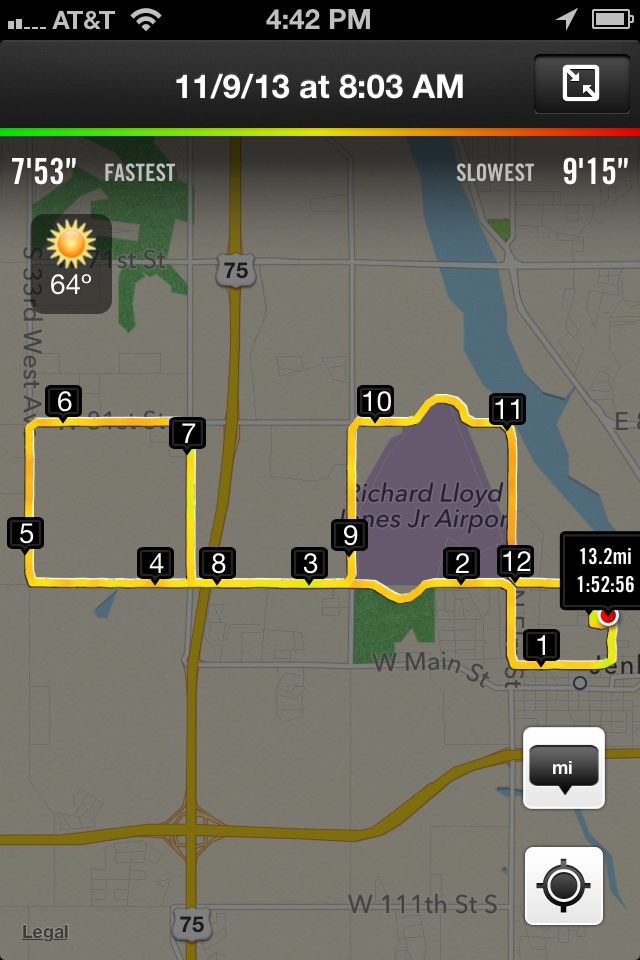 My goals for the race were pretty simple:

Being new to running, I find it hard to know where to line up for the start.  With big marathons, it’s easy:  find the corral and walk forward until I run into people.  For smaller events, though, I find myself gravitating toward the back as I don’t really think of myself as all that fast.  Nevertheless, in every race I’ve run, I spend a lot of time and energy early in the race passing other runners.  Some of it is adrenaline pushing my pace too high, but some of it is just my inexperience in knowing where to line up.

Between adrenaline and traffic, I ran my first mile at 7:53 min/mile.  Without my hydration pack, that’s a sustainable pace for me, but with a full pack, it’s crash and burn pace.  Putting 12 pounds on my shoulders changes the pace dynamics drastically, and I have to be really careful not to burn out the major leg muscles, quads, hams, and calves, by going too fast.

Fortunately, I happened upon a more experienced runner with whom I started a conversation.  He was aiming for the same pace I was and was nice enough to let me hang in beside him and chat for the majority of the race.  Seeing as I was without my headphones due to the course being open to traffic, it really helped pass the time and kept me much more on pace.  In fact, we managed to run all but about 4 miles from that point on at 8:30 pace.

As I mentioned, the open course prompted me not to wear headphones which meant I wasn’t hearing time and distance information from my GPS app.  What hadn’t really occurred to me prior to the race is that I tend to drink at every 1/2 mile announcement from my app.  Without the app making those calls, I completely fell off of my hydration and fuel plan.  On top of that, around mile 8, I had some of my sports drink try to come up on me which further delayed my hydration.  At mile 12, I suddenly felt extremely sluggish and dropped to 9:00+ pace for the final 2 miles, even walking a little bit shortly before the last couple of turns.

Even with these challenges, though, I’m still happy with the results of my first official half marathon:

Needless to say, these numbers are exactly what I was after for my first Half Marathon and final long training run of the season.  It wasn’t the pace I could run without a pack, but it was a pace I can hopefully sustain for most of a full marathon.

Unfortunately, the run went from great to terrible at the end.  On my way out of the event, I mentioned to a friend that I felt more tired than I should and was still perplexed about those last 2 miles.  It didn’t take long for it to become clear I had messed up my hydration.  I kept trying to get going after the half, and I just couldn’t.  If it wasn’t a pain in my right shin, it was a cramp in my left calf.  If my legs started feeling better, my shoulders and arms would stiffen and lock up.  Eventually, I was being bent over by cramps under my ribs and just had to call it a day.  Once you’re that far gone, there’s really no good way to come back.

Finally at home, the scale told the complete story.  I had dropped at least 7 pounds during the run.  It’s hard to know exactly how bad it really was because I hydrated heavily during the time I spent trying to run my additional miles.  I weigh myself before and after almost every run to try to gauge if my hydration is keeping up with my sweat rate.  I find 2-4 pounds off of my 170-175 pound frame to be fine, but going much past 5 pounds is a recipe for disaster.

So, lesson learned.  I have to be much more mindful of my hydration and not let anything distract me from drinking on schedule.  In fact, I went out this last Saturday and put in 14 miles just to show myself that it was all hydration and nothing to do with conditioning.  I know that’s more miles than most run the last weekend before a marathon, but I felt like I needed a bit of a confidence boost.

So, with any luck, this Sloth is about ready to run Route 66 and make last year’s DNF a distant memory, and with just a little extra luck, clock a somewhat absurd 2 hour PR.