The marathon gods apparently do not know that the Sloth does not like cold weather. At the 2011 Oklahoma City Memorial Marathon, this Sloth endured low 40’s, lightning, high wind, rain, and even sleet over the 5 hour and 55 minute slog to the finish line. During last year’s Route 66 Marathon, the temperatures were better (high 40’s), but I still found myself fighting hypothermia when we returned to downtown Tulsa around mile 14. You can imagine my consternation upon seeing the early forecasts for freezing temperatures and snow for November 24, 2013.

Oklahoma did not disappoint. My home state hit us with temperatures in the mid-20’s driving wind chill into the teens, and instead of warming up as the day went on, it actually cooled off. Several times throughout my 4 hour and 22 minute trek, I felt freezing rain on my forehead, but it was light and short-lived. Fortunately, the skies never fully opened up like they did in Southern Oklahoma.

Before we get into the details, here are my stats from the race:

On the Friday before the race, I dropped by the Route 66 Marathon Expo for packet pickup. With my wife’s help, we drove almost the entire marathon course to get a better idea of what I would encounter on race day. Although very familiar with the 2012 course, the race directors made what I think was a great decision to move the finish line to Downtown Tulsa, specifically Guthrie Green. The move took all participants, half and full marathon alike, under the Route 66 sign for the climb into Downtown, but it also took a few miles of the course away from the nice, flat run down Riverside and replaced it with more time in the hilly neighborhoods around Midtown.

Was I intimidated?  Definitely.

Saturday proved the weather forecasts right on target, and I felt the need to get outside and test clothing options. Could I run with a balaclava?  The answer was not only a resounding yes, but in that 2 mile shakeout run, I realized I had no chance to finish without it.  I also discovered that 2 layers on my upper body were not enough.  The final outfit included:

If you struggle with cold weather like me, it’s probably hard to find good references on what to wear in freezing temperatures for a marathon.  I was concerned this concoction might overheat me, but it was never even close.  I was comfortable for many of the first 12-14 miles, but on the back side of the course, the cold got to me.

If I could make one change to this outfit, it would be including an extra pair of gloves.  My hands were so numb around 3 hours out that I couldn’t tell they were soaked with sweat.  At the end of the race, they were discolored, and I’ve experienced mild numbness and tingling in the fingertips since the race.  If I had stashed an extra pair of gloves in my pack, I think I would have shaved 5-10 minutes off of my finish time not having to worry about keeping them warm.

At the start of the race on Sunday, I was lined up in Corral C near the 11 minute/mile sign.  Needless to say, that wasn’t really where I wanted to start, but the Corral seeding algorithm must have changed from 2012.  They seemed to focus more on my previous marathon finish time than my projected finish time.  As a result, I had to pass everyone ahead of me in Corral C plus the majority of the runners in Corral B.

I knew it would be a challenge, but I never anticipated just how clogged the roads in front of me would be. With my adrenaline far too high at the start, I logged my first mile at 7’59”. Corral C was a distant memory just a few minutes into the race, but that also meant I saw the mass of runners from Corral B before the end of the first mile.  For the next 8 miles, I ran far too much side-to-side, taking way too many outside corners.  My GPS reflected the effort logging a little over 1/2 mile long for the race. Even so, I got through it with the 8’45″/mile pace I wanted, but that kind of running early in the race takes its toll. 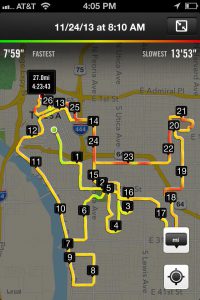 With my headphones on, music cranked, and GPS calling out 1/2 miles, I stayed on top of my hydration strategy trying hard not to crash and burn due to dehydration.  In the cold weather, dehydration is much more insidious because the last thing you want to do is consume cold fluids, but dehydration makes hypothermia all the more likely so you have to stick with it.  The only hydration mistake I made was using too much of my EFS drink and not enough water and coconut water.  With frozen hands, it was tough to get the bottles out of the pack and back in so I used the reservoir tube a bit too much.

The race was progressing as well as I could have expected, and I ran continuously through mile 18. Near the end of 18, though, my stomach woke up.  It was the primary culprit in my Okc 2011 death march, and I was immediately concerned it might not only cost me time but possibly even cost me the finish. Months of testing and planning seemed to be unraveling just 7 miles from the finish.

After a fairly long walk and skipping some fluid intake, I did some test running.  My surgically repaired ankle had seized up and was screaming, but my stomach had settled down.  I started using a bit more water as I was concerned going too heavy on electrolytes might have been bothering my system.  I was able to get back to 9’29” pace through mile 20 for most of the run through the University of Tulsa.

That’s when the impact of the cold really settled in. I had been alternating my face mask on and off of my mouth and nose to stay warm. Without it, I was far too cold, but my lungs were too tired to keep pulling air through it.  Like I said above, the sweat had soaked my gloves, and my hands were not only cold but painfully so.  I walked a lot.  I walked to keep my hands in my pockets, in fists, against my legs, and I walked to let my lungs rest.

The feeling of my lungs was not unlike that first time you get out and run a 5k after taking a couple of months off. The muscles may be willing, but the lungs just won’t do their job. That’s how I felt.  I had legs ready to run 9’00” pace, but my lungs couldn’t even handle a brisk walk.  So I would walk for a while, usually up hills, and then try to get started running downhill and hold on as long as I could before the next walk.

I never fully recovered, and 4 hours slipped through my fingers. As soon as it did, my motivation dropped significantly. The goal at that point was just to get to the finish line healthy and under 4 hours 30 minutes.

There were a lot of long walks and short runs, and I was helped a lot by a friend of mine running by at mile 23. I tried to stay with him but only made it a little over half a mile before my lungs told me to stop.  When I got to the 25 mile sign, though, I felt a bit of adrenaline hit my system, and I took off again.  All I had to do was run a 10 minute mile, and I would finish well under 4:30.

“And look, there’s the Center of the Universe Detour.  Why don’t I get my my extra medal?  I’ve still got time.”

Marathon brain at its best.  Last year, the Detour was partially flat, but this year it was up, down, up, down with a nice little curb hop.  To add to the difficulty level, I decided to run directly toward a volunteer, realize my error, and jump to the left at the last second. Adrenaline gone…or at least so I thought. 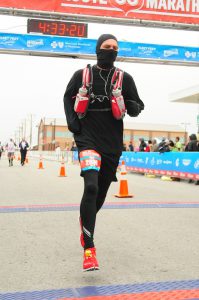 I had to walk quite a bit more when I turned North on Denver as we went under the railroad bridge and back up another short but steep hill.  I also walked a bit in the flats before making the turn toward the finish line.  Once I saw the line, though, I realized I still had my legs even if I didn’t have my lungs.  Sometimes in the pool, you can reach for a few extra strokes without a breath when you know the finish is right there.  And that’s exactly what I did…I held my breath and sprinted to the finish.  This wasn’t an 8’00” mile.  It was a 100 yard dash.  I felt like I flew past the 10’00” milers between me and relief.

There are a lot of questions, but you know what? If you take away the Detour, I ran the 2013 Route 66 Marathon at approximately 4 hours and 13 minutes.  That’s after a 5:55 two years ago on an easier Oklahoma City course and a DNF last year on nearly the same course.  This was a success.  It’s a success that tells me I can run a sub-4 marathon and possibly work my way down into the mid 3’s before age catches up to me.  The only question is…do I want it enough to go do it?