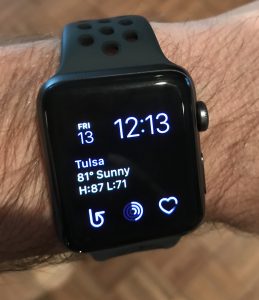 As a child of the 70’s, I come from a generation whose parents and grandparents religiously wore watches. Watches in those days were a combination of form and function. They were both jewelry and time travel protection, rendering the wearer immune to the time jumps inherent in relying on the microwave ovens and wall clocks of the world that lacked any time server synchronization beyond the occasional reset after the janitor called Time and Temp. Unfortunately, watches had no effect on that tardy slip you got because the school clock had drifted 5 minutes fast by the start of the 2nd semester.

Anyway, where was I? Oh, yeah…I don’t like watches. To me, watches feel like jewelry, and I don’t like drawing any extra or unwanted attention, either positive or negative. They also exposed me to more social interaction, and as an introvert, I prefer to be left alone.

“Excuse me sir, do you have the time?” Nope!

So the advent of cell phones was great for me. When I started carrying a phone full time around 2005, I suddenly had ubiquitous access to the time, and it wasn’t just *any time*, it was the *right* time. I no longer had any practical reason to wear a watch.

When I began running in 2011, I immediately bought an armband for my iPhone and started tracking runs on Nike Plus. Carrying the phone was a bit annoying, but even if I had a GPS watch, I would carry the cell phone for emergency purposes.

Between a 24/7 on-call job and young children, I need to remain in contact when I’m on the run. Leaving the phone behind isn’t an option for me no matter how many times keyboard warriors tell me I should leave it behind.

So during the announcement of the original Apple Watch in 2014, I wasn’t looking for a stylish timepiece. I was looking for a waterproof GPS watch with cellular connectivity. Needless to say, I was disappointed, but there were likely very good reasons Apple’s first foray into timepieces missed my mark.

Primarily, I think the powers that be at Apple genuinely wanted a stylish timepiece with some smartphone-like functions. Tim Cook is over a decade older than me, and he’s more connected to those watch-wearing generations I mentioned earlier. If you do an image search for old pictures of Tim Cook, guess what you find. He’s usually wearing a watch.

Second to Apple’s focus on style, I don’t believe the battery(/power-saving) technology was ready for GPS and cellular. Samsung had its 3G capable Gear S available around the same time, and the reviews I read then said battery life with GPS was terrible. If I could find the review in question, I would link it, but I’m fairly sure it said a run with GPS and 3G drained the battery completely in around 2 hours. That might be fine for faster runners or shorter distances, but my marathon long runs usually last 2-3 hours.

When Apple announced Watch Series 3, I immediately started digging through their website for the relevant battery life details. Fortunately it didn’t take too much digging. With both GPS and LTE enabled, the Series 3 can potentially run for 4 hours. That number is very likely optimistic especially considering that I will be using AirPods for music, but it’s still at least 30 minutes of wiggle room for even the longest of my long runs. 2 hours is my absolute minimum requirement for GPS + LTE + AirPod music, and I’m hoping it holds up.

My Apple Watch Series 3 just arrived on Wednesday (October 10th, 2017). That’s right…this watch hating runner ordered Series 3 immediately upon release. I didn’t go wait in line on opening day because I don’t do that, but it *is* the first product I have ever ordered on launch day.

The setup of the watch with my iPhone 7 and AT&T service was surprisingly (at least to me) flawless. It’s not unusual for Apple’s part of the process to work, but when adding the $10/month plan to AT&T worked without a hitch, I had to pick my jaw up off of the floor. The only improvement I could see in the setup is a faster way to add music to the Watch, and the prompt for adding music should come during Watch setup instead of the first time you open the Music app. I do love the Heavy Rotation music option, though.

On Thursday, I had time to get out for a quick 4 mile run around noon. I left my iPhone at home and headed out with just Apple Watch Series 3 and AirPods. Although I may switch run trackers (or finish SubdueTheSloth) eventually, I went ahead and used NikePlus for this run.

When I started the run, the Apple Watch had already been off of its charger and connected to my iPhone for 6 hours. Over the 40 minutes I was out (warmup, running, cool-down, stretching), I listened to music through the AirPods the entire time. I tracked 2 runs. I did a 5K which lasted about 22 minutes, and then I tracked another 3/4 mile back to my car because I ran out a little too far for my 5K. In between the two runs, I called Sloth Wife from the Watch and talked for about 5 minutes.

When I returned to my car, battery life was still above 70%. As I write this, it’s about the same time of day, and battery life is at 95%. Based on those numbers, it appears that Series 3 will meet my 2 hour minimum requirement. I doubt it will make it through 4 hours, but I’m holding out hope for 3 hours if I don’t make or receive any phone calls.

The next major step is to get Series 3 out for a 9-12 mile run and see how the battery holds up. I’m cautiously optimistic and really hoping I can retire my Garmin and iPhone for normal training runs.

I still don’t like watches, but so far, I do like my little wrist phone gps tracker. Just don’t ask me for the time.

I’ll report back on battery life after I’m able to log some longer runs.