Disclaimer: Always consult a Doctor for medical issues. There are a lot of opinions on how best to deal with Sea Urchin spines. 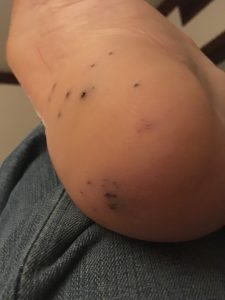 Back in March, I blogged about trail running in Kona, Hawaii. What I failed to mention was that my feet were doing their best impressions of pin cushions during that run. Looking back on the injury and complications that followed, I think there may be some useful information for other runners so let’s get into it.

I’ve probably mentioned at some point that I don’t really enjoy traveling, but one of the few destinations that can get me excited is the ocean. The beach affords me the opportunity to relax and unwind, and as a former reef aquarium enthusiast, any ocean destination with abundant reef life piques my interest. So even though I wasn’t excited to travel, I was excited to get to the ocean.

On our first full day in Hawaii, some of us decided to get in the water off the hotel’s beach. It was high tide and the waves were significant enough that treading water was a challenge. Unfortunately, I hadn’t seen the beach area at low tide to know the dangers just below the surface, and before I knew it, a wave had pushed me into the sea urchin covered lava rock wall. I planted my feet to avoid getting my body cut up by the rock and ended up with the aquatic equivalent of kicking a porcupine.

Sea Urchin venom is painful but not unbearable. That said, pain affects everyone differently and the location of the sting likely makes a difference. An allergic reaction is also a possibility so don’t play around. Get to safety and deal with the problem before continuing with any swimming activities.

To neutralize the venom, use vinegar.

Many will suggest urine as a quick alternative, but it’s not clear to me how effective that option may be. It appears that sea water or hot water are both better options than urine, but if you’re desperate, I’ll let you make up your mind.

Of course, once the pain from the venom subsides, you’re still left with the pain of a bunch of spikes still in your skin.

Your initial reaction to the urchin spines is to pull them out. Some Doctors will even advise removing them, but my understanding is that you increase the odds of a secondary bacterial infection. The spines are extremely brittle so pulling will just cause them to break off instead of coming out cleanly like a splinter or thorn. And yes, I yanked on a big cluster of spines that were sticking several inches out of my heel, and they just broke off.

Sea Urchin spines are made of Calcium Carbonate which our bodies can absorb. Calcium Carbonate can also be dissolved by Vinegar. Over a period of 3 weeks, I did 2-3x daily soaks in Vinegar to help dissolve all of the spines in my feet and toes. It was a long process, but as a runner, I DID NOT want a Doctor cutting on my feet.

With what I know now, my preferred treatment would have been an IMMEDIATE foot soak in Vinegar as hot as my feet could tolerate without burning. The Vinegar neutralizes the venom and works to dissolve the Calcium Carbonate spines, and the heat helps loosen the skin to (hopefully) let some of the spines fall out.

If you do a few Internet searches, you might see a story about some crazy guy having a friend beat the spines with a board. I think the goal may be breaking the spines into smaller pieces the body can absorb more quickly, but I’m honestly not sure. Since this article is from a runner’s perspective, though, I would advise against bashing your feet with a board. If it’s another body part, have fun if a good beating ticks your boxes.

I had one cluster of spines that kept acting infected (swollen and reddened appearance). In a rare and unexpected display of potency, the OTC triple antibiotic ointment that NEVER works actually got the job done. It kept the infection at bay while the spines continued to dissolve.

That said, consult your Doctor if you see signs of infection.

After being stung on the first day of a week-long vacation, I had to suck it up and get on with the vacation activities and relaxation. This meant being in sandals and barefoot frequently throughout the remaining 6 days of vacation. In one case, we spent some time snorkeling in a pool at another much more popular hotel, and I suspect it’s at this hotel where I picked up a plantar wart.

I’ve been exposed to plantar warts before but never developed one. That’s likely because it’s rare for my feet to have broken or damaged areas where the virus could gain access. Of course, with my foot peppered with Sea Urchin spines and the soles softening from repeated Vinegar soaks, I had basically rolled out the Plantar Wart Red Carpet.

It took me 7 months to cure my Plantar Warts, and I know people that have been trying for years to rid their feet of Plantar Warts. This is not a complication you want.

Protect your feet. Go straight to the shoe store and buy some water shoes. If you’re in a public area, wear them to reduce the odds of a secondary infection. Honestly, this is probably a good idea even if you don’t get stung by a Sea Urchin. In fact, if I HAD worn water shoes, I wouldn’t have ever been in this predicament in the first place.

Going for a day at the beach? Make sure you have your Sunscreen, Towels, Vinegar, and Water Shoes…not in that order.