As part of this series of blog posts, I’ve been doing quite a bit of running on Zwift, and on a whim this past Saturday night (February 22, 2020), I hopped into the 10K at the Watopia Run Festival. This being my first virtual race, I had no idea what to expect and saw a little of everything.

When I logged into Zwift about 10 minutes before the race, I had no idea how to actually get into the race. The race was showing in the upper right corner of the user interface (UI), but clicking on it actually took me out of the race. After a few minutes, the race notification popped up and allowed me to click to move to the starting line.

At the starting line, some virtual racers were standing still or stretching and others, like me, were on the move already. The race showed me walking on a little virtual treadmill at the starting line. I was moving because I knew my tracking device would disconnect if I stopped for very long and because there’s a delay in tracking. I was planning to start running 30-60 seconds before the gun so it would pick up the correct speed right out of the gate.

I think there were 18 runners originally registered for the race, but when the race started, there were only 9 of us. Racers were there from several countries including the United States, China, South Korea, and more.

The racer from China was a bit of a curiosity. Before the race, she was next to me and running pretty fast on her virtual treadmill. When the race started, she shot out of the gate like lightning. I think her pace during the first mile was mostly in the 5:30 minute/mile range.

Needless to say, I was expecting not to finish well if this was the kind of competition I was facing. But, a funny thing happened. She slowed down…then she lost connection…then she sped way, way, way up. At one point, I saw 2:30 minute per mile pace stay up for about 30 seconds, and she spent her fair share of time in the 4’s with longer forays into the 6’s. And then there were the 20’s. Over the first 2-3 miles, her pace, at least when I was watching, varied between 2:30 minute/mile all the way up to 20+ minutes/mile.

For my race, I was planning to run mostly mid-7’s. I hadn’t run a full 10K in quite a while so I didn’t want to run too fast and blow up in the last couple of miles. The South Korean runner tried to hang with me, but it wasn’t long before I was alone in 2nd place.

The only question at that point was whether or not I could catch what I could only assume was a cheater. 2:30 can’t be real, and I can’t imagine a tracking device making a mistake that bad. Mine wasn’t perfect, but I’m rarely off more than 30 seconds/mile for a brief amount of time. Fortunately, the dropouts and apparent walking became more and more frequent. I was almost 4 minutes behind, but every time her tracking disappeared, I would close around 30 seconds.

Somewhere around the 3 mile mark, I caught her during a prolonged stop. She started up again and acted like she was going to pass me back, but her tracking seemed to become very stable at that point, and she could only maintain low-7 pace for less than a 1/4 mile before walking again. After that, she dropped out of the race completely.

My tracking did cut out twice, and I still haven’t figured out what’s causing it. I probably need to get a foot pod and stop using the app that turns my Apple Watch into a Zwift tracker, but I really feel like I shouldn’t need extra hardware given what I already have. The cut outs only cost me about 20 seconds, though, so I finished in 1st place around 3:30 ahead of 2nd.

On the whole, I really enjoyed the virtual racing experience in Zwift. It’s a low stress way of entering a race at just about any time of day, and since I went into it expecting some tracking irregularities and possible cheaters, seeing the unusual behavior of the temporary first place runner was a source of amusement. I really hope she was experiencing technical difficulties and not cheating, but I’m fairly sure it was intentional.

As the weather starts to warm up here in Oklahoma, I’m sure I will Zwift a bit less, but it’s definitely a platform I’ll likely stick with for treadmill running for the foreseeable future. As it turns out, I think I’ve discovered that one of the things I like about running is the chase, and there are more people to chase on Zwift than on Tulsa trails…even cyclists (apologies dude, it was mile 6 and uphill is harder on a bike). 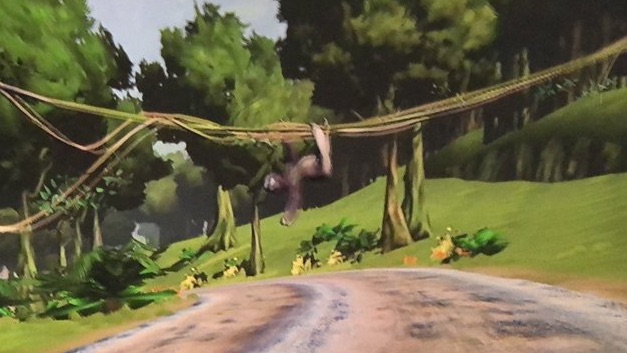 What are the odds that my first Zwift race, a race in which I take 1st place, routes me directly under a Sloth on the way to the finish line?